Dr. Who is a British television show about a time-traveling man, who is a time lord, and his adventures with him and his companions. The show originally started in the 1960s in Britain and grew a big enough audience that a remake was launched in 2005.

The San Diego WhoCon was started a few years ago due to Dr. Who fans wanting a convention that was closer than Gallifrey, which takes place in LA. While the San Diego WhoCon is a smaller convention it has a strong following and solid panels and does bring in celebrities. Last year, the convention managed to bring in one of the companions to the third doctor.

Now that the background is out of the way, lets actually discuss the first day of SD WhoCon. We started out registering for our badges and picking up the schedule for the convention. The first panel we went to discussed character drawings and how to approach artistry if you are a beginner or struggling. It was an informative panel and the instructor was very nice. One of our friends even got the ball rolling on a Dr. Who themed wine and paint. Which would be awesome! Some of his artwork is featured below and is up for auction at the convention. 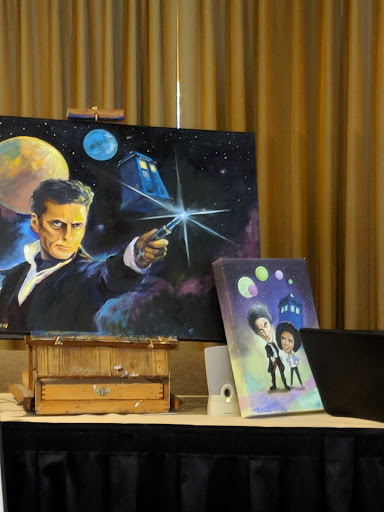 Our second panel discussed asteroids and whether or not Dr. Who gets it right. This panel was led by the manager of the Dr. Who convention and he did a good job. It explored different asteroids and what they were made of and showed a few Dr. Who examples. The examples were then used as jumping off points for discussions on whether or not an asteroid was used correctly in this case. It was an interesting perspective on parts of Dr. Who.

Our third panel was about physics in the Dr. Who universe and asked two questions.

Could the TARDIS be actually bigger on the inside?

Could the TARDIS actually travel back in time?

The more important question is can the TARDIS go backwards in time? Unfortunately, it cannot due to relativity issues in modern day physics. That was disappointing to hear but I expected that answer.

This panel was fun and informative and the instructor managed to make the math material interesting and he gave us diplomas! We graduated!

After this panel we decided to head home and call it an early evening.